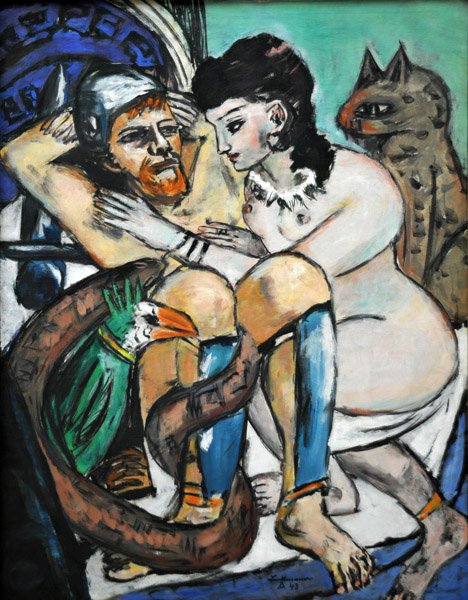 there is such a love in his eyes

her smooth hands cup his mouth

drinking the words he would gush

if they were not pressed tightly, one to the other

locked in an embrace

quickening as signature is fluid

when she finds out, she imagines telling her daughter twenty years hence

the story of her conception;

your father and I loved you very much

we lay down by the fireplace, he took me in his arms

from this passion you were forged into life

you were wanted, even before you chose

to fill us with yourself

my stomach grew and grew until

it was a tight drum on which to paint

the symbols of your dream

He moved in her, his eyes tightly shut

in the office toilet at lunch with folded magazine

here in his arms, still he betrayed with desires, ill-tuned to eternal love

when she grew fat and round he did not

wish to hold her quite so tightly, or touch her hot flushed pressing flesh

he thought of others, he got up early, and jogged his frustration into sweat

Don’t worry the doctor smiled, with a savage wink

don’t worry the doctor smiled, with a savage wink

i’m going to sew her up even tighter, it will be like

Christmas day when you unwrap her again

and over his starched cloak and gown, the doctors grey eyebrows

went up and down and he, who was lost

lurched and threw up at the violence and the shame

of men and of women and of life and death, inequality and lust

then his daughter was born

fat and round and squalling loudly

if he could have interpreted those words, he felt they spoke to him a repromand

for his cowardice and his fears, imagining being a father

of growing up and settling down, of love and impossible challenges and joys

he saw his wife’s face, wet with sweat and hair plastered down

he felt more than he had ever felt, the emptiness of the past replaced

stripped her of choice with impregnated seed

and now he knew

the fear of men is the strength of women

his daughter fixed him with swollen red eyes

watching him with a stearness that seemed to say

you can do this, you got this, you are not your worst thought

you can be who you want to be, you can be my father, you can love these women

you can direct our future, reshaping mountains

or fall into the arms of least resistance, worship the emptiness of hollow gestures

turn away from your shallow sport, take this road with us

he who once was weak, grew with love

those things that once were, no more

his resilience, their armor

against the unknown world